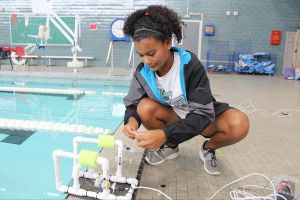 LOWELL — After about a week of constructing an underwater robot from PVC pipe, propellers and pool noodles, rising eighth-grader Walter Palacio drops it into the pool. The front of the robot lifts up as Palacio navigates it around the shallow end of the University of Massachusetts Lowell Campus Recreation Center pool — it is too buoyant. Palacio made his robot in IDEA Camp, a collaboration between the UMass Lowell Francis College of Engineering and Lowell Public Schools. The contraption can submerge, spin, travel across the pool and resurface. Now, it needs weight to hold down the front end. "Where should I put the weight?" he asks a camp instructor, who encourages him to think about it logically.

After mulling it over, Palacio uses string to tie small silver weights to the front of the robot. Much better. It's not every day that most teenagers build robots, pick up a soldering iron, or code a video game. But it is at IDEA Camp, where Lowell teachers guide kids through week-long science and engineering workshops.